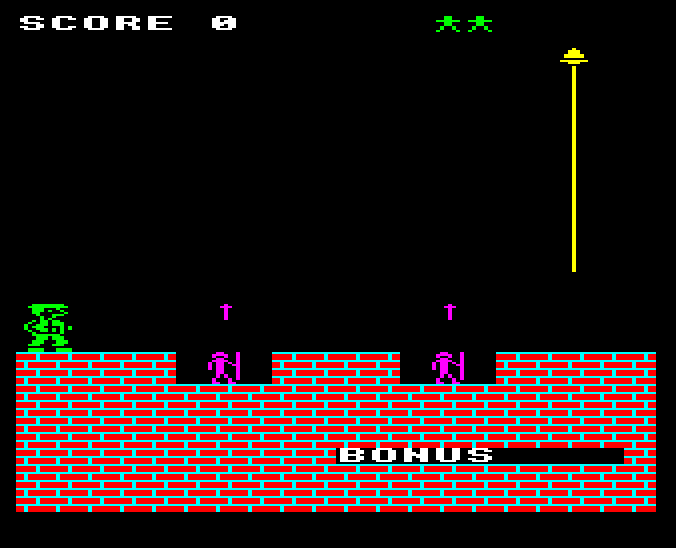 Published on the PCW Games Collection from Personal Computer World magazine. These compilation cassettes were published by Century Communications Ltd.

Hunchback is to be found in most arcades and it is one of the more unusual games. You control Quazimodo, champion bell ringer of all France, as he scurries across the roof of the abbey to rescue his true love, Esmerelda.

To complete each screen, pull on the bell rope and exit the screen to the right. Here is a table of what happens on each level of the game:

1. Arrows and rocks fly across the screen and spears are thrown upwards.

2. Same as level one plus a block appears in the middle of the screen over Quazimodo's head.

3. Same as level two except that another block appears on the screen and boiling oil falls instead of spears being thrown.

4. Same as level three except that another block appears on the right and both oil and spears have to be avoided.

5. Similar to level four except that the two left-most blocks now become wider.

6. The same as level five except that there is a rope that also must pulled to finish this screen and release Esmerelda.

When you complete all this, Esmerelda begs poor Quazimodo to rescue her sister from a similar predicament So, being a love-struck fool, Quazi goes through it all again. This time, however, the time bonus (bottom right of the screen) decreases faster. If it reaches zero then Quazi bites the dust!

Though this version of Hunchback may not offer all the varied levels of the arcade original, it still offers a satisfactory challenge for even the most skilled players.

This program is also an excellent demonstration of just how fast BBC BASIC can be. On most other computers this game in would be unbearably slow!