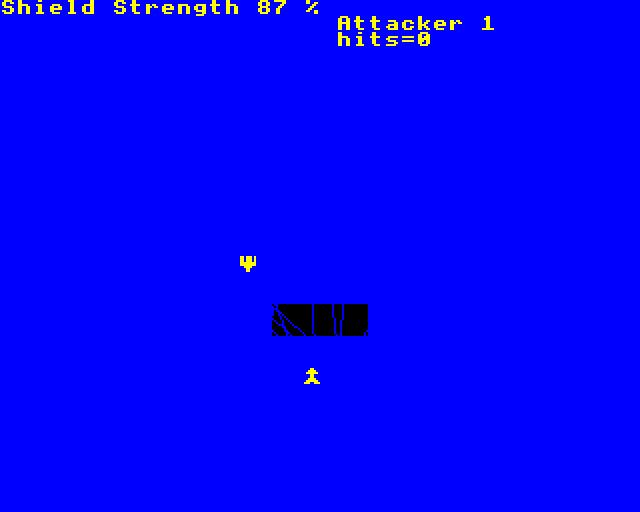 Your weapon can destroy anything anything that it actually hits. So the
only problem in this game is to ensure that the missile finds its target,
quickly and accurately. The enemy ships sweep in from the left and
the right firing relentlessly. Your missile is only vulnerable if its
protective shield is eroded away and then it can be easily blasted in its
home base. Otherwise, it is impervious to enemy fire, even outside its
base. If it hits an enemy it will explode on contact but if it fails to find
its target it will disintegrate as it reaches the upper atmosphere. You
can launch ten missiles and there are ten enemy ships. Each ship
maintains a stable orbit until you actually take a shot at it so you can
wait in the base while deciding which side to fire from, and when to
fire − except that with every orbit more of your shield is blasted away
by enemy fire and once there is only 20 per cent of it left you will no
longer have any protection from the enemies’ lasers. This fast moving
graphics game is enhanced by sound effects and is quite compulsive to
play.