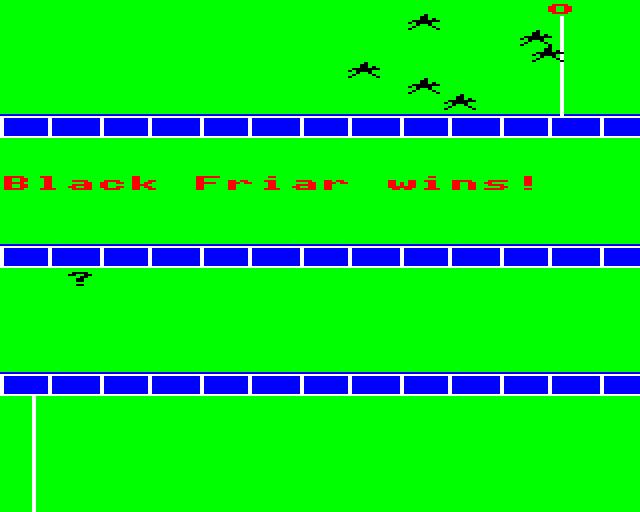 Published in the book "BBC micro programs in BASIC" from Newnes technical books. The book contains the following description:

Another old favourite, especially when a group of friends congregate and shout themselves hoarse cheering on their fancied nag. Up to six can play, each starting with £100. The 'meet' starts a 2.00 pm and goes on until 6.00 pm, with a race every 15 minutes' game time, stopping sooner if any player runs out of cash. There is a pool of 20 horses, each with its own handicap. Only six horses are randomly selected out of the pool, so the possible permutations of horses running against each other are enormous. In addition, after every race the winning horse has its handicap increased - as per Jockey Club rules - while the others have theirs reduced. Similarly, Honest Joe the bookie will shorten the odds on winning horses and lengthen them on losers. The result is that it is a good test of judgement and skill at picking winners.

The first screen gives the title and asks for the number of players. The second screen seeks each player's name and then we move into the game loop, which consists of three more screens. The first is the Honest Joe. We are given the number of six horses, their names and odds, each player in turn is asked for his or her bet - the number of the horse backed and the amount.

The next screen is the race proper, and comprises four broad bands of green representing sections of the course. For verisimilitude we add posts and rails, a winning post and the start line, behind which we see the six horses and riders. On pressing RETURN, the names disappear and six horses race forward. As they reach the right edge of one section, they appear at the left edge of the one above, continuing in this way until one reaches the finish. The name of the winning horse is thrown on the screen and the action is frozen while players argue, if they feel like it - although it won't do them any good!

The final screen addresses each player by name and gives news of what happened to their bet and their current cash state. If all have cash the game time is advanced and we return to Honest Joe Bloggs to place bets for the next race.