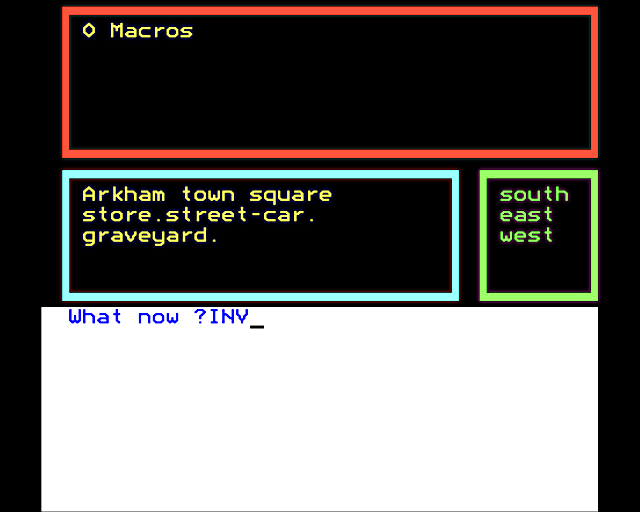 Published in the Virgin Computer Series book Adventures For Your BBC Micro by Alex Gollner, which contains the following description:

This long and intricate adventure by Stephen Loughran is based on the fantasy writings of H. P. Lovecraft, who wrote eerie horror stories about mysterious long-dead civilisations and all-powerful evil gods out to destroy you at the mere mention of their name. Though not in the sword-and-sorcery vein, this scenario is just as exciting – anything might happen…

Your aim is to get all the money you can, then find safety. The commands can be entered in upper or lower case. Instructions are included in the program.

There is a feature for disc users – you can create macros. Macros are used when you wish to save a ‘routine’, such as the commands to go into a creature’s lair and kill it. If you enter ‘MACRO killcrea’, enter the commands to kill the creature and then enter ‘END MACRO’ – the routine will be stored on disc. This is useful if you go on to another part of the adventure and are ‘killed’ because you can enter the creature’s lair and kill it just by typing the command ‘killcrea’. These macros, are stored on disc – if you do not have a disc interface you need not enter the lines followed by a colon (:) which deal with macros.